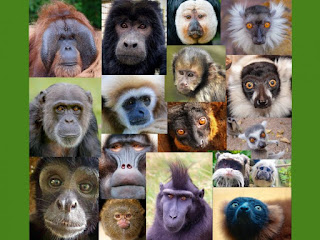 Hey everybody! Welcome to this meeting of Animal Explorers! I'm Ms. Meghan, and for fifteen years I was an animal keeper at different zoos.  Now that I'm here at the Galesburg Public Library, we're going to explore the animal kingdom together! Each month you can pick up a Animal Explorers kit and become an expert on a new animal! Then you can come and talk about it at our club meeting.

This month we're going to prattle about primates. World Lemur Day is on October 30, and we're teaming up with Lemur Conservation Network to learn, share, and act to save primates together. Which species did you become an expert in? What's one thing you learned about your primate? Which primate species is your favorite? Tell the club in the comments below.

STEM to You: Science Starter Pack

Hello Stem to You members! This post will be your portal to our interactive participation for the Science Starter Pack event.

Now that you've drawn your scientists, tell us about them in the comments! Use three descriptive words to complete the sentence 'my scientist is ___'. What kind of scientist did you draw? What are they doing? Where are they working? What is similar and different about other people's scientists? If you want, post the drawing of you as a scientist, too!

You can watch the video on how to make you paper rockets here.

Here is a page with detailed biographies for the scientists who were featured on the collage. There's information on each one of them, as well as where you can find out more information about them and the fascinating work that they're doing.


The Galesburg Public Library has a lot of books on science and scientists. Here are a few to check out that tie in to this activity. 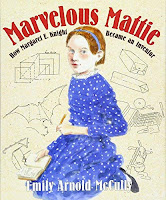 Mattie could sketch and build just about anything. When she was only twelve years old, she came up with a metal guard on looms that kept workers from being injured and killed. As an adult, she invented a machine to make the square bottom paper bags that we still use today. However, a man tried to steal her idea and challenged her in court, saying she "could not possibly understand the mechanical complexities." Mattie proved him wrong and won her case! 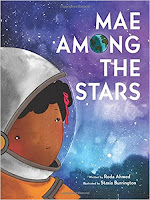 Mae Among the Stars
by Roda Ahmed
New York: HarperCollins, 2018

Inspired by the life story of Mae Jemison, the first black woman in space, this wonderful book teaches you how to dream big and follow your heart. 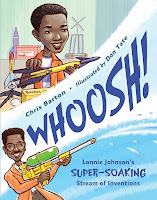 Lonnie Johnson invented the mechanics for the Super Soaker entirely by accident. In his bathroom. While trying to create a new cooling system for refrigerators and air conditioners. This is just one of the many inventions and projects he's worked on in his career as an engineer, including powering the spacecraft Galileo that explored Jupiter.


Did you know you can sign up for a Galesburg Public Library card online? Just visit the link here to get started? 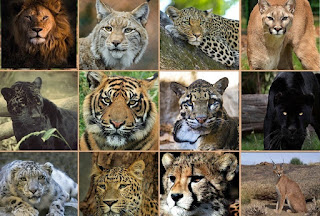 Hey everybody! Welcome to the first meeting of Animal Explorers! I'm Ms. Meghan, and for fifteen years I was an animal keeper at different zoos.  Now that I'm here at the Galesburg Public Library, we're going to explore the animal kingdom together! Each month you can pick up a Animal Explorers kit and become an expert on a new animal! Then you can come and talk about it at our club meeting.

This month we're going to chat about cats. Which species did you become an expert in? What's one thing you learned about your cat? Which cat species is your favorite? Tell the club in the comments below.
Posted by Ms. Meghan (GPL staff) at 7:00 AM No comments:

Once Upon a Unicorn 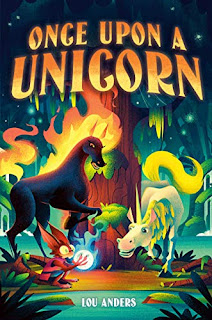 Once Upon a Unicorn
by Lou Anders
New York: Crown Books for Young Readers, 2020

"I don't think everything that is beautiful is beautiful. Not really. And I think a lot of things that aren't beautiful really are."

Everyone knows that unicorns are beautiful and golden and don't really think about much besides themselves. And everyone also knows that night mares are mean and fairies are always good. Right? So what happens when a unicorn with a Scientific Mind meets a night mare who's determined to prove that she's just as Good as any unicorn? Oh, and there's a guy with a pumpkin for a head who's trying to catch them, too.

So, I've been with obsessed with unicorns since I was about, oh, three years old or so, and I think it's safe to say it may be a life long condition. I was very excited to get an ARC (Advanced Reader Copy) of this book. A unicorn with a Scientific Mind AND a night mare AND a fairy queen whose personality may be more aligned with the original fairy folk than Disney (those tales were originally warnings, after all)? I am absolutely in. Curious the unicorn is trying to conduct an experiment when he encounters Midnight the night mare, who has her own Plan. The two soon end up saving each other from Jack o' the Hunt, a pumpkin-headed entity who wants the two horses for his own reasons. Curious and Midnight must put aside their prejudices and work together to save their world. I really enjoyed this book. It's a longer chapter book that's recommended for grades 3-7 by the publisher. The characters are well-written, and I honestly didn't see one of the twists until shortly before the reveal. A lot of people think unicorns are only for girls, but this book will appeal to all readers. Once Upon a Unicorn will be available soon from Galesburg Public Library. Thank you to Crown Books for Young Readers and NetGalley for the ARC. 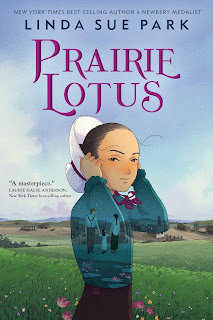 Hannah and her father are moving to the town of LaForge in Dakota Territory in 1880. Hannah is excited to set up their dress good shops, and maybe show Pa that she's a good enough seamstress to start sewing dresses for the ladies in town. But Hannah is very aware of the fact that she looks different from the other townspeople. Her late mother was Chinese and she and Pa have had to move away from other towns before because of it. Can LaForge be their final stop?

Author Linda Sue Park loved the Little House on the Prairie series growing up, but knew in her heart that Ma would never let Laura play with her because she was Asian. Prairie Lotus is influenced by that series, told through a different set of eyes. Experienced readers will recognize landmarks and some familiar faces in the town of LaForge, but previous experience with Wilder's work isn't necessary. This is a wonderfully written book in a familiar setting, told in a new and necessary voice. I highly recommend it for both fans of the Little House books and anyone looking for a fantastic piece of historical fiction with a female lead.
Posted by Ms. Meghan (GPL staff) at 9:52 AM No comments: 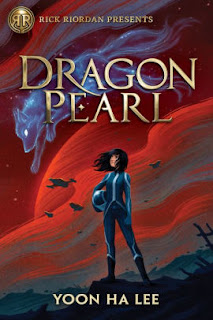 Kim Min is a thirteen year old fox spirit, affecting a human appearance, and living with her family on the settler planet of Jinju. Her mother has always discouraged her from using her fox magic, like Charm and shape shifting. Foxes are not highly regarded by other supernatural beings or humans. But when her brother Jun is reported as a military deserter, Min must use all of her tricks if she's going to find him and clear his name.

Okay, this is Korean folklore and magic and fox spirits and dragons and goblins. In space. What more could you ask for? This is another wonderful afternoon escape from the Rick Riordan Presents imprint. I can honestly say I've never read a space opera like this, and I'm looking forward to the second book set in the same world. It should absolutely be noted that one of the main secondary characters uses they/them pronouns, as do other minor characters. And just look at that cover. Dragon Pearl is available for curbside pickup through the Galesburg Public Library and through the Libby app.
Posted by Ms. Meghan (GPL staff) at 12:40 PM No comments:

100th Anniversary of the Ratification of the 19th Amendment

August 18 marks the 100th anniversary of the ratification of the 19th Amendment, which prohibited states and the federal government from denying women the right to vote based on their sex. Introduced into Congress back in 1878, this amendment represents decades of meeting, protests, letter writing campaigns, hunger strikes, marches, and more. Even after 1920, Black, Native American, Latina, and Asian American women were still unable to vote until decades later due to state laws and other barriers.

In honor of this momentous anniversary, we've collected our favorite books on voting and women's suffrage. We hope that you'll check them out through our curbside pickup program! 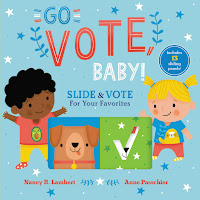 A fantastic first voting book, this board book has sliders allowing the readers to vote on important issues like cats vs. dogs and ice cream vs. cake. 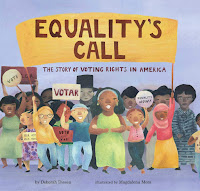 A right isn't right
Till it's granted to all

Through rhyming verse, this book provides a look at the history of voting rights in America. While representation was supposed to be a strength of our new nation, in truth only white men who owned property were initially able to vote. But over the years, through the struggles and efforts of many people, more and more Americans were able to vote and make their voice heard. 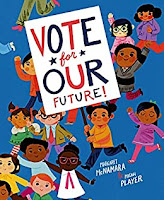 Vote for Our Future!
by Margaret McNamara
New York: Schwartz and Wade, 2020

This biography is aimed at beginning readers and tells the story of one of the leaders of the woman's suffrage movement.

'Myths! Lies! Secrets! Smash the stories behind famous moments in history and expose the hidden truth. Perfect for fans of I Survived and Nathan Hale's Hazardous Tales.

In 1920, Susan B. Anthony passed a law that gave voting rights to women in the United States. RIGHT?

WRONG! Susan B. Anthony wasn't even alive when the Nineteenth Amendment was ratified. Plus, it takes a lot more than one person to amend the constitution.

The truth is, it took millions of women to get that amendment into law. They marched! They picketed! They even went to jail. But in the end, it all came down to a letter from a state representative's mom. No joke.'

'This adaptation of the book Hillary Clinton calls "a page-turning drama and an inspiration" will spark the attention of young readers and teach them about activism, civil rights, and the fight for women's suffrage--just in time for the 100th anniversary of the ratification of the Nineteenth Amendment. Includes an eight-page photo insert!'